2nd Amendment Rally: A Message of Unity in Support of a Common Cause 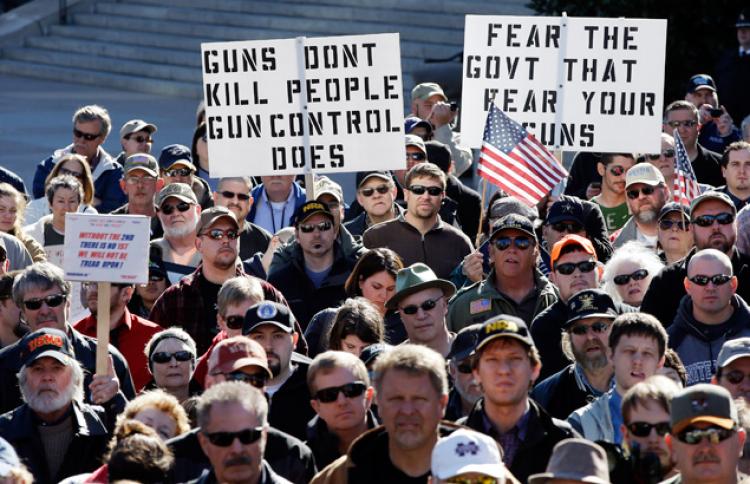 More than a thousand firearm owners and Second Amendment activists converged on the West Lawn of the United States Capitol on November 2nd in support of their constitutionally guaranteed right to keep and bear arms. The Capitol dome served as a dramatic backdrop for the roster of more than two dozen speakers who took the podium to inspire and energize the crowd. Far from being confrontational toward the opposition, the 2nd Amendment Rally was built around a central message of unity among supporters of freedom and liberty, who had come from across the country to join together in support of a common cause.

As one speaker humorously remarked, the Second Amendment doesn’t just apply to “middle-aged white guys with beards and pot bellies;” it applies to every single American and grants us all the equal right to self-preservation, regardless of background. To that end, activists of all ages and ethnicities and from all walks of life came together as friends and allies at the rally—the audience members ranged from people chanting “Bernie!” to those wearing “Trump 2020” flags like capes. The speaker list included competitive shooters, trainers, lobbyists, lawyers, and even a few YouTube personalities; they quoted historical figures ranging from Benjamin Franklin to Malcolm X. Despite the ideological diversity of the crowd, everyone got along like old friends, for they were all united as one.

After the final speech concluded, I made my way through the dispersing crowd to talk to audience members and gauge their reactions to the whole event. Two of the people I spoke to had come into the city from Northern Virginia to show their support for the Second Amendment community. One of them carried a sign advertising r/liberalgunowners, an internet message board; the other held a sign saying, “Free Hong Kong, send AR-15s.” According to Nick, one of the two, they had come to the rally in order to show off what he termed the “diversity of ideas” of firearm owners nationwide. For someone such as myself living in a “free state,” it is sometimes easy to forget that gun ownership is not a phenomenon exclusive to the political right. Nick told me that he found the whole event thoroughly enjoyable, especially the experience of meeting and talking to other Second Amendment supporters from around the country. He said everyone he’d met at the rally was very open-minded and welcoming, noting that “people loved the signs.”

As I alluded to before, it can be difficult for people living in “free states” live Virginia to understand how unfriendly some state governments are to civilian armament. Doug, a man who had driven in from New Jersey to attend the rally, gave me an inkling as to just how bad life can be for gun ownership in “ban states” like his—the Constitution of New Jersey does not enumerate the people’s right to keep and bear arms, and firearms are essentially treated as illegal by default unless covered by a so-called “exemption” codified into law. David, who had come to the rally with Doug, told me that since 1966, New Jersey has had some of the most oppressive gun laws in the country, and out of the state’s nine million residents, fewer than 1,100 have been able to obtain their CCW permits. Doug and David are both members of the Coalition of New Jersey Firearm Owners, a grassroots nonprofit with similar goals and tactics to SDCGO. I was fascinated to see how groups of concerned citizens living thousands of miles away can independently build similar community outreach and lobbying groups to fight similarly repressive regimes.

Another activist I spoke to who is working to preserve the Second Amendment in seemingly unlikely circumstances was Mark, a member of an organization called Black Guns Matter. Founded in 2016 by Maj Toure, who made time to speak at the rally in the midst of his campaign for Philadelphia City Council, Black Guns Matter works to train and educate people living in urban areas on gun safety and self-defense. During his speech, Toure highlighted the fact that gun control laws have historically been targeted at black communities and used to disarm them in the face of brutal violence from gangs and white supremacist groups alike. Mark emphasized how important it is for every American to fight to preserve our Second Amendment rights, no matter how powerful the opposition may seem. He told me that gun owners living under harsh restrictions should always remember that they are “not alone,” and concluded by saying to “keep up the good fight.”

In our efforts to resist further restrictions on our right to self-preservation, hardcore firearm enthusiasts can often forget the value of outreach and education in recruiting more people to the cause. Casey, from South Carolina, told me he was “just getting into the community,” doing everything he could to learn more about firearms and self-defense. He noted how events like this rally “won’t change anything overnight,” but that we must not be discouraged and continue educating the un- and misinformed, noting that “knowledge is power.”

In my opinion, one of the most important topics highlighted during the event was the role of the Internet and social media in educating outsiders and bringing them into the fold, as well as providing an effective means for Second Amendment activists from across the country to organize and unite to further our common cause. Othais, known for his extremely well-researched and incredibly in-depth YouTube videos about very old historical firearms (on his channel “C&Rsenal”), told me that initially, he had not planned on attending the rally. What changed his mind was all the naysayers commenting on his videos about how they thought the event would be poorly attended and unproductive. In the face of all the negativity from within the community, he decided to take time away from his busy schedule to travel from South Carolina to attend the rally, “not for the channel, but for personal reasons.” Othais told me that contrary to all the negative hype he saw in the weeks leading up to the event, it was “great,” and that “everyone was on point” with their messages of unity. He got the distinct impression that rather than being a political protest, the rally served as a “message to the community,” inspiring concerned citizens from every state in the Union to communicate and organize more in order to make real accomplishments and “replace the collapsing NRA.”

Many firearm owners fail to realize just how important the Internet has been in educating and uniting firearm enthusiasts. I spoke to Brian and his friends, who live in what many gun owners call the “occupied territory” of Maryland and Pennsylvania. Brian, who has been a member of the ar-15.com web forum for as long as I have been alive, told me that the rally was a great opportunity to “meet like-minded people” all gathered together in one physical location. Online message boards have allowed gun owners living thousands of miles apart to build very real communities around their common passion, organize their efforts in the fight for our rights, and even plan real-life events such as this very rally.

In order to gain an inside perspective on the rally itself, I interviewed Eric, one of the organizers, who also runs the popular firearm-related YouTube channel IraqVeteran8888. Eric emphasized that the event had not been planned, sponsored, or officially promoted by any companies or organizations—it was created entirely from the ground up as a nonpartisan grassroots effort. He told me that he was pleased with how smoothly everything ran, and how “important [it is] for people from different backgrounds” to be a part of “something larger than yourself.” From “all across the political spectrum,” every single attendee was interested in fighting for “one unified goal.”

Don’t fret if you wanted to come to the 2nd Amendment Rally yourself but couldn’t make the time in your schedule to come all the way out to Capitol Hill—Eric told me that he plans on holding more of these grassroots events in the future. He hopes that when video recordings and press coverage of the event reach the internet, more people will be motivated to join in and fight for the Second Amendment cause. After all, this rally—the first of its kind—went off without a hitch, and it was entirely planned and executed by members of the Second Amendment community rather than by any formal central organization such as the NRA. Eric is a strong believer in the power of the Internet to connect and unify gun rights supporters from across the country and all backgrounds, enabling them to hold events like this one. As the resounding success of this year’s 2nd Amendment Rally shows, the Internet can truly act as the new public forum it has for so long tried to be. Or, as Eric so efficiently put it, “social media is us talking.”