Governors Stand Up to the Gun-Grabber-In-Chief 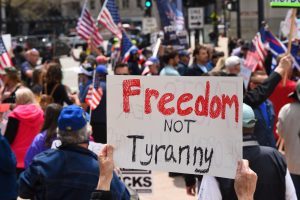 For those who are not clear on the gun-control issue, it’s not about impeding criminals or increasing public safety. Gun-control is about disarming Americans so that they may be more easily controlled. Pretty much everything stated by gun-control extremists, which includes the current Democratic party, is untrue. Tucker Carlson provides what I believe to be a very complete description of the fraudulent Democrat gun-control strategy in this short video.

The Biden administration is skirting around congress and using executive orders to infringe on the 2A protected rights of all Americans. The White House says this is only the beginning. The Biden administration is attempting to gain confirmation of a radical anti-gun extremist to head the Bureau of Alcohol, Tobacco, and Firearms (ATF). If you’re not familiar with David Chipman please watch Tucker Carlson’s video linked above.

Some governors are acting and beginning to fight back:

Almost all gun-control laws infringe on the Second Amendment, one doesn’t need to be an expert on constitutional law to understand this. The problem is that politicians tend to ignore the Constitution as it serves them, and Americans too often tend to tolerate this. We have three distinct branches of government for a reason. We either have a Constitution or we do not. The question is again in what kind of country do we wish to live?

Previous PostDo Those Around You Know What To Do During A Critical Defense Incident?
Next PostWho Is David Chipman and Why Should You Care?